In Pali, Dhamma Kāya (pronounced as Kaaya) literally means the Body of Dhamma.

Dhamma Kāya has its physical abode in the midst of the endless sugarcane fields which dot the landscape of Eastern Uttar Pradesh, the most populous state of present-day-India.

Situated in Kushinagar, the Centre is a mere 5kms from where the Buddha brought the curtains down on his 45-years of relentless, selfless, painstaking service. Nay, the place is indeed the culmination of a journey through eons, of a man who walked tall among men. Seemingly small, insignificant and oh-so-humdrum, the Buddha imprinted the hoary history of this place with his inimitable legacy and an eternal future. When Ven. Ananda (his cousin and leading disciple) pleaded with him to reconsider his decision to depart from this small and insignificant town, the Buddha remarked about its glorious past in glowing words. In the lifetimes gone by, when he was a wheel-turning Monarch by the name of Mahasudassana, the Buddha-then-Bodhisattva had left his mortal remains from this very place.

“When the Buddha finally passed away, it was not just the end of one life. Millions of lives, countless lives, had come to an end. And it was such a good end, after he had helped so many. At that moment there was very strong Dhamma dhātu, Nibbāna dhātu, and the effects have remained for centuries. – S.N. Goenka“

Very close to this sacred place, after years of efforts, the Centre has been developed on 3.45 acres of land with single room accommodation for 28 male and 12 female students, a temporary Dhamma hall suited for 35 meditators and a Dining Hall with a capacity for 100. With this very small beginning, Dhamma Kāya holds great promise in the resurgence of this second Sasana of Dhamma.

Gorakhpur is a city located along the banks of Rapti river in the north-eastern part of the Indian state of Uttar Pradesh, with a population of 673,446. It is located near the Nepal border, 273 kilometres east of the state capital Lucknow. It is the administrative headquarters of Gorakhpur district and Gorakhpur division. The city is home to the Gorakhnath Math, a Gorakshanath temple. Read More 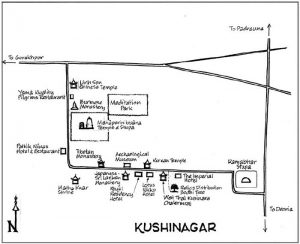 Kushinagar (also known as Kusinagar, Kusinara, Kasia and Kasia Bazar) is a pilgrimage town and a Notified Area Council in the Kushinagar district of the Indian state of Uttar Pradesh located around NH-28, and is 52 km east of Gorakhpur city. The name of “Kasia Bazaar” was changed to “Kushinagar” and then “Kasia Bazaar” became a municipality with the official name “Kushinagar”.

It is an important Buddhist pilgrimage site, where Buddhists believe Gautama Buddha attained Parinirvana after his death. It is an international Buddhist pilgrimage centre. The followers of Buddhism, especially from Asian countries, wish to visit this place at least once in their lifetime. Read More