The foremost lay teacher of Vipassana meditation
of our time.

Although Indian by descent Satya Narayan Goenka was born and raised in Myanmar (Burma). While living there, he had the good fortune to come into contact with Sayagyi U Ba Khin and to learn the technique of Vipassana from him.

After receiving training from his teacher for 14 years, Mr. Goenka settled in India and began teaching Vipassana in 1969. In a country still sharply divided by differences of caste and religion, the courses offered by Mr. Goenka soon attracted thousands of people from every part of society. In addition, many people from countries around the world came to join courses in Vipassana meditation. 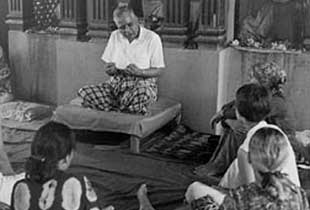 Over a period of almost 45 years, Mr. Goenka and the teachers appointed by him taught hundreds of thousands of people in courses in India and other countries, East and West. Today, meditation centers established under his guidance are operating in Asia, Europe, the Americas, Africa and Australasia

The technique taught by S.N. Goenka goes back two and a half millennia to the Buddha. The Buddha never taught a sectarian religion; he taught Dhamma – the way to liberation – which is universal. In the same tradition, Mr. Goenka’s approach is totally non-sectarian. For this reason, his teaching has had a profound appeal to people of all backgrounds, of every religion and no religion, and from every part of the world.

Mr. Goenka was the recipient of many awards and honors in his lifetime, including a prestigious Padma Awards  from the President of India in 2012. This is one of the highest civilian awards given by the Indian Government.

Satya Narayan Goenka breathed his last in September 2013, at the age of 89. He has left behind an imperishable legacy: the technique of Vipassana, now available more widely than ever before to people around the world.